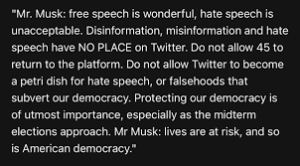 Elon Musk has never been shy about speaking his mind on whatever issue he’s asked about. He’s especially eager and willing to accommodate a carefully selected interviewer who asks him about himself and his business interests and vision.

He stayed true to form the moment the deal closed on his big forty-four-billion-dollar Twitter buy. As he put it in fittingly his first Tweet, ‘The bird is free.” It didn’t take a veteran birdwatcher to figure out that he wasn’t referring to the feathery flock. He was talking about Twitter and his vision of what it should be, or more particularly what could be said, and who could say it. That is anybody and everybody.

In that liberating moment, Musk positioned himself as the arch-defender of open, unvarnished, no-holds-barred free speech. Twitter under his thumb would be a true open market of ideas and speech. There was one tiny problem with this, in fact, several problems. The first is that Musk deliberately made no distinction between free speech and hate speech. The two are hardly the same.

It took no time for legions of tweeters and soon-to-be tweeters to take the cue. They bombarded Twitter with their I can say anything I want gloats targeting anyone, with gender and ethnic slurs.

One report that made headlines found that the N-word was bandied about with unabashed glee in tweets. The use of the word soared by five hundred percent. Musk shrugged off the criticism of the hate talk. Lebron James who had the temerity to object noted “So many damn unfit people saying hate speech is free speech.”

Musk hid behind a statement from a Twitter executive who claimed the controversy over unbridled hate tweets was much ado about nothing. He promised, “Twitter will be forming a content moderation council with widely diverse viewpoints.”

The second problem is that Musk evidently didn’t get the word. Nearly every survey and study have shown that racist and antisemitic hate slurs, digs, and insults, have been on a continuing upward trajectory over the last few years. If it was just a matter of some warped, hater tossing out vile racist slurs, it could be shrugged off.

However, words have consequences. The consequences in far too many cases mean one thing: violence, assault, and physical attacks. The FBI’s annual hate crimes reports provide ample evidence that hate violence has continued unabated. This is not to say that tweeting the N-word for instance is going to cause someone to go out and shoot up a Black church or retail store in a predominantly Black neighborhood. However, recent past deadly experience shows that that is exactly what happened in at least two deadly cases.

There’s yet another problem with Musk’s presumed defender of free speech stance. It’s not just some hate-spewing, juvenile delinquent, ranting on Twitter. The woods are filled with organized social media hate groups. They are adept at using innocuous keywords and race-neutral titles to give the façade that their criticism of Blacks, Latinos, Muslims, Immigrants, Jews, Gays, and women has no hidden racial, ethnic, gender, or sexual orientation animus. Many innocent social media networkers stumble on the hate group pages and are appalled at what they see and read. But they are still exposed to hate-mongering and that ensures a wider audience.

Before Musk took over Twitter, hate groups homed in on Facebook, Twitter, and other social media platforms to influence and even recruit others to their ranks. They figured out ways to skirt the social media censors and ratchet up their hate-filled vitriol on their sites. They pawned it off as poking fun and satire at minorities. And for the most part, they got away with it until the pressure and outrage became so great that Twitter and Facebook put some controls on just how far someone could go with their hate-filled rants.

Now there’s the question of profiting from hate. Musk certainly can count and knows that the more Twitter users he can pile on the more attractive Twitter is to advertisers. Positioning Twitter as a virtual uncensored ‘open forum” for any and every point of view, no matter how vicious, vile, and hateful that view is stated makes good business sense.

There’s even a bit of an ideological tweak to grab more cash from cash-flush corporations and GOP and conservative political and advocacy groups. That is to reassure conservative groups that have hammered Twitter as being too left-wing and progressive, that it is anything but that. Musk’s free speech tout is the not-so-subtle signal that there will be no left bias on anything that he’s put his ownership stamp on.

Whether Twitter will take any steps to put some checks in place to curtail the flood of unvarnished hate tweets is anybody’s guess. Musk has been coy and cagey about this part of the business operation.

In the meantime, the floodgates will remain wide open to tweeting hate.

Earl Ofari Hutchinson is an author and political analyst. His forthcoming book is “The Midterms: Why They Are So Important and So Ignored” (Middle Passage Press). He also is the host of the weekly Earl Ofari Hutchinson Show, 9 to 11 a.m. on KPFK 90.7 FM Los Angeles and the Pacifica Network.