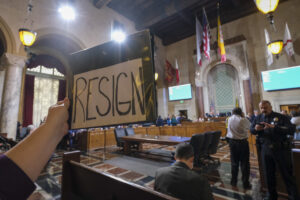 The reform proposals for the Los Angeles City Council have flown fast and furious in the days after the unholy three city council persons Nury Martinez, Gil Cedillo, and Kevin deLeon were caught making or saying nothing about racist slurs. The reform proposals are a rehash of what has been mouthed, hinted at, or editorialized about for the past few years.

They call expanding the council, stripping the council of the power to juggle districts, ban lobbyists from the council chambers, and get the council out of the sweetheart deal making business with developers. These are common sense proposals that should have been implemented years ago.

However, even if these proposals were instantly implemented, they would not change the way the council does business. The brute reality is that the council has made corruption, wasted time, dysfunctionality, and plain ineffectiveness an institution. The reason is simple there is no requirement or demand from the reformers for the two words and actions that would radically overhaul the way the city council or any other legislative body should do and act.

That is the demand for one hundred percent transparency and accountability by council members to those who put them in office. Let us take transparency first. All politicians pay lip service to it. They profess that they are transparent with their constituents. Transparency means more than just sending out an occasional online newsletter (some do not even bother with that) or having an occasional town hall to let residents and stakeholders’ gripe, complain and blow off steam.

The simple requirement should be that no spending decisions be made district wide or city wide before, during and after direct consult and input from varied stakeholders in the district. That should be mandatory. This reform requires much more than simply focusing on the one area that gets the councilpersons repeatedly in legal hot water. That is their cozy sweetheart, give away the company store, play for pay antic with big developers.

This reform strikes to the heart of democratic decision making and citizen engagement on all spending that directly affects constituents. The thing to remember, it is their dollars, not the council’s that’s at stake. One glaring example of the closed door in the dark spending of the city council, which has near mortally wounded L.A., and taxpayers is the never-ending surge in homelessness that make L.A. streets look like Kolkata (Calcutta). There have been tax increases, bond measures, massive funding from the state and feds amounting to tens of millions earmarked solely to reduce or in the more fantasy promise, end homelessness. Yet the number of homeless on L.A.’s streets, park benches, underpasses, lots and fields, and campers is bigger than ever. Now there is yet another ballot Proposition making the same Alice in wonderland pitch for voters to again pay more to end homelessness. Here is the same question. How many know how the city council spent the mountains of cash they plied out of voters and residents to end homelessness in the past, only to see the numbers on the street continue to surge? Transparency on this crucial issue of spending, means total open books on how the money is spent, and open public input on the spending.

Now for accountability. L.A. politicians as all politicians again pay much lip service to it. And, as with transparency, few really mean it let alone welcome it. If that were the case, they would continually inform their constituents, residents, and stakeholders on all proposals debated and discussed at every city council meeting and in committee meetings on vital public policy issues. There would be no cozy executive sessions to which the public is totally barred from where the crucial decisions on spending and public policy are made. There is zero public input or knowledge of these decisions until after the fact—if then. Executive sessions are the favorite time-worn ploy the city council uses to maintain opaqueness, mystery, secrecy, and self-aggrandizement.

Transparency and accountability can be reduced to these pledges–open books, open meetings, open disclosure, open doors. So, simply moving redistricting decisions from one set off politicians to another or putting more warm bodies on the city council means nothing. It does not strike to the heart of making the city council truly a body that embodies in spirt and fact true representative government. To repeat, a public pledge from anyone who seeks a Los Angeles City Council seat to strictly adhere to  open books, open meetings, open disclosure, open doors should be mandatory.

Anything less than total and iron-class openness on all spending and public policy issues just ensures more of the same from whomever sits on the L.A. city council.

Earl Ofari Hutchinson is an author and political analyst. He is the author of the forthcoming The Midterms Why They are So important and So Ignored (Middle Passage Press). He is the host of the weekly Hutchinson Report on KPFK 90.7 FM Los Angeles and the Pacifica Network. He is the publisher of thehutchinsonreport.net