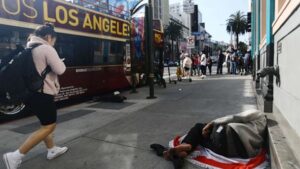 L.A. Mayoral candidate Karen Bass has a 100-day plan for tackling some of the gaping problems facing L.A. The runaway number one of which is the homelessness debacle. A big part of Bass’s 100-day plan centers on that. She does not offer any pie in the ski promises that L.A. politicians like to make such as “I’ll end homeless.” I’ll eradicate homelessness.” I’ll make homelessness disappear.”

These are the kind of empty promises that we’ve heard far too many L.A. politicians repeatedly make. They have spent tens of million, tossed up a few encampments and makeshift housing here and there, and repeatedly demanded taxpayers cough up millions on the pledge that their dollars will be used to end homelessness. All the while many of L.A. streets, parks, freeway sidings and underpasses, look like Kolkata (Calcutta).

Bass takes a realistic and comprehensive approach to the problem. It is not a matter of simply putting a roof over the heads of thousands of persons on L.A. ‘s streets. It requires an equal investment in drug, and alcohol, counseling, job finding and placement, skills training and retraining, childcare, nutrition, and the ongoing monitoring of service programs to ensure effectiveness. This is a long, hard, uphill process. There are no quick fixes. The next occupant of City Hall must understand that.

It will take a mix of ramped-up approaches — strategic spending, land-use changes, housing subsidies and the expansion of support services — to dent the problem.

The homeless crisis does not exist in a vacuum. It has a nefarious twin that is virtually unchecked. High rents make housing and apartment affordability in L.A. a bad joke and swells the homeless numbers.

The new mayor must craft and push the city council to enact a solid land-use plan to rein in upscale development. That means taking checkbook politics out of the development process while ensuring the building and subsidizing of more affordable housing.

Next is getting a handle on L.A.’s rampant sprawl that has turned freeways and streets into stalled parking lots for hours on end. The answer is the continued expansion of light transit, busways, traffic signal coordination and synchronization, traffic flow monitors at major thoroughfares and carpooling incentives.

Related to this is the issue of climate change and the environmental damage that poses a grave peril to the city. The challenge is in greening the city, cooling the city, cleaning the air, providing clean and safe drinking water, reducing the massive amounts of carbon and fossil fuels that unchecked emissions, drilling, and manufacturing and refining dump into the air and water. This requires a full-blown implementation of a green agenda, with funding, goals, and timetables for getting measured results.

Then there is the always thorny issue of LAPD misconduct. How a mayor manages it is perennially the issue that mayor’s walk a tightrope on.

The trick is how to balance the ongoing fight for police reform, continue to prod the department brass and the police commission to maintain vigilance on the issue, while also dealing with citizens’ fear of gang and criminal violence.

The operative words on this remain firm direction, oversight, and rigorous discipline.

The next mayor must understand that there are legions of voters who are fed up with the malaise, the fog of government and the self-serving that has often enveloped the mayor’s office. Nowhere was that disgust more evident than in the furor over the Los Angeles City Council’s leaked tape of racist jabber by three L.A. city councilpersons. This cast the ugly glare on the corruption, cronyism, manipulation, scheming, secrecy, and chronic thumb the nose at constituencies through backroom deal making with mostly high roller developers that has been an ugly trademark of the city council. That must end. And the next mayor must not trust the city council to reform itself.

This means clamping down on special interest deal-making cronyism, in and outside City Hall, trimming a bloated city bureaucracy and sneaky tax increases that smack of old-fashioned political pork barreling.

Put bluntly, there must be no “for sale” sign on City Hall. A major key to ensuring the smooth, effective, resident-friendly, operation of city government is tough, hard monitoring, oversight and review, and accountability of city agencies.

This starts with keeping a tight rein on the people who run these agencies. The mayor’s job is to make the right choices to head those agencies. In the absence of that, city agencies turn into top-heavy bureaucratic leaden, inert, wasteful, crony ridden entities.

Outgoing Mayor Eric Garcetti trotted to Washington to lobby for more funding for housing and business development in grossly underserved South and East L.A. The next mayor will have to do the same, becoming a vigorous advocate for the city.

It will take someone who knows the levers of power and has the savvy and political connections to ensure L.A. gets the best deal it can out of Washington.

The next L.A. mayor will have to hit the ground running. That requires political smarts, connections, ability, and the expertise, to grapple effectively with the colossal challenges facing the city. It is not a task or job for on-the-job training.

Earl Ofari Hutchinson is an author and political analyst. His latest book is West, Irving and the Never-Ending Debate over Black Antisemitism (Middle Passage Press). He also is the host of the weekly Earl Ofari Hutchinson Show from 9 to 10 a.m. Saturday on KPFK 90.7 FM Los Angeles and the Pacifica Network. He is the publisher of thehutchinsonreport.net