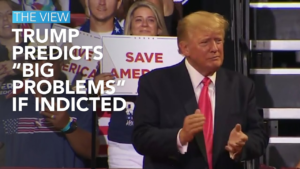 It was not the pithy “…But Liz Chaney lost by a record 40 points!”  that Trump posted on his Truth Social platform immediately after the House Select Committee investigating the January 6 Capitol riot leveled a hefty prosecution bill of goods against Trump that caught the eye. It was the number of “retruths” and “likes” of his post that did.

The thousands of supporters that responded to Trump’s mocking post of Cheney, the Vice Chair of the committee, and one of the loudest most avowed of Trump’s sworn enemies, gave a strong hint why US Attorney General Merrick Garland is not likely to prosecute Trump. It has nothing to do with the law, or the impeccable meticulous case that the committee presented for a Trump prosecution.

It still as always has everything to do with politics, Trump’s continued popularity, the political risk, and a 2024 presidential election. Much has been made in the news headlines on the polls that purport to show Trump’s fading popularity. They give the impression that Trump is a dead letter politically among Republicans. And that he has little chance to grab the 2024 GOP presidential nomination. The blunt reality is far different.

Buried near the bottom in the polls that claim Trump is a has been, a whopping near seventy percent of Republicans still like the guy. They rate him “very” or “somewhat” favorably. Nearly fifty percent still want him to run for president again. Even more telling, nearly forty percent flatly say that they are MAGA backers. That means they are lockdown fervent Trump boosters.

This significant Trump support translates out to millions of voters who still see him as the second coming and have not lost faith. Since Trump took office in 2016 there have been two House impeachments, two senate trials, a Trump Organization conviction, and numerous lawsuits and settlements. There are added past and ongoing criminal investigations of Trump. This has done absolutely nothing to shake the true believer passion millions have for him. A recommendation from a House panel stacked with avowed Trump animus Democrats and Cheney is hardly going to move the dial against Trump among this bunch.

It is more than just their passion and big numbers President Biden and Garland must take a hard look at. I say Biden. Because ultimately, he would have to sign off on a Justice Department indictment of Trump. This is where the politics and perceived political danger to the Democrats come in with an indictment.

The Democrats hold on Congress and the White House is beyond fragile. It resembles almost shattered glass. Trump’s supporters are still a major vote force to be reckoned with in the four or five swing states that again will decide the White House in 2024. Biden’s approval ratings continue to fluctuate between low and mediocre. At the close of 2022, a solid majority of voters still disapproved of Biden’s performance.

Biden has not moved the dial on his approval ratings appreciably upward more than a few points at any point during his presidency. His disapproval ratings have about matched Trump’s which stayed rooted in the mid forty percent range during his White House tenure. A 2024 rematch between Trump and Biden is still fraught with at best uncertainty and at worst peril for Biden’s reelection.

An indictment of Trump would escalate that uncertainty and danger to unprecedented heights. Trump would have the rallying cry of the ages to spur, prod, whip up and anger his millions of impassioned boosters. He would scream, “I’m a political victim of vindictive, hateful politically motivated Democrats.” He has consistently shouted this line and variations of it through every effort Democrats and prosecutors have made to nail him. It has worked.

There is a similar scenario being played out in the documents case where Trump pilfered classified documents from the White House for personal use. There is plenty of evidence that he broke the law. As in the past, there is much talk and much speculation about a prosecution, but nothing more-yet.

The fallback is always that Garland and the DOJ is slowly, patiently, taking its time. That its investigators are examining all aspects of the case. That is always the standard line with Trump’s very provable illegality.

There’s only slim hope that things will be different with the House committee recommendation to prosecute. Committee members made clear that though they hoped the DOJ would act on their recommendation for indictment, they sounded less optimistic, let alone assured that Garland would act.

Purely from a legal standpoint, there is no reason Trump cannot and certainly should not be indicted on any of several violations. The House recommended four. The reason he likely will not be is not the law or the Constitution, and certainly not his hector of Cheney. It is Trump’s die-hard popularity with millions and the political danger a prosecution brings. Garland well knows that.

Earl Ofari Hutchinson is an author and political analyst. His latest book is Midterms—Why They are So Important and So Ignored (Middle Passage Press). He also is the host of the weekly Earl Ofari Hutchinson Show 9 a.m.PST  Saturday on KPFK 90.7 FM Los Angeles and the Pacifica Network and on Blogtalkradio.com at 9AM PST Wednesday He is the publisher of thehutchinsonreport.net