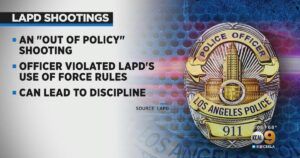 LAPD Chief Michel Moore wants a second five-year term as LAPD chief. It is up to the L.A. Police Commission and L.A. Mayor Karen Bass to approve his reappointment. The early indications are that they will. However, as I mentioned in a prior column on Moore and the LAPD, there are still questions that he must answer about just what and how he has implemented the mandated reforms within the LAPD. The biggest one is radically curbing the overuse of deadly force by officers.

Frankly, the record on this score in recent months has been nothing short of horrendous. There are still too many deaths of civilians at the hands of LAPD officers that at the very least could be called dubious. They include the usual, a suspect armed with a sharp weapon, a suspect died after being tasered, a suspect who was charging at officers. The shootings and aggressive action may well have been unavoidable, but again they may have been. At the very least they raise the usual questions about the LAPD’s continued reliance on deadly force in encounters.

There have been countless reports, recommendations, rule changes, investigations, civilian checks and balances on the LAPD and its policy about when to use and not use deadly force. It often seems as if none of these things ever happened or meant little to nothing. The LAPD’s wanton, reckless, and outrageous slaying of 14-year-old Valentina Orellana Peralta in December 2021, was grim testimony to that. The LAPD shootings during that year and through 2022 rose. Even when the LAPD shot fewer people the death toll from the shootings has remained high.

The killings continue to ram home the perennially troubling issue of what, when, and how LAPD officers should use non-lethal force. What makes these slayings even more dubious is that they came in the wake of legislation the state legislature passed January 1, 2020. It mandated strict training, accountability, and discipline procedures for the use of force by officers. Since the law was passed, however, the number of shootings, some questionable, has not dropped. The LAPD shooting sprees are a prime example.

The one certainty in these killings is that they are not isolated cases of deadly force used by the LAPD. So, the question remains in these shootings is why? The stock answer is that whenever a suspect poses a direct threat to an officer, or an officer responds to a potentially life-threatening incident, he or she can use whatever force is necessary up to and including deadly force. In more cases than not this is a strictly subjective, judgment call. And, in almost all cases, officers that use lethal force are shielded from prosecution in the absence of iron-clad proof of wrongdoing. No LAPD officer has been prosecuted for the use of deadly force on duty no matter how questionable in many years.

A prosecution must leap a mountainous bar. That requires the testimony of another officer, a smoking gun body or dash cam recording, or a preponderance of consistent testimony from civilian eyewitnesses that the killing was unjustified. Even then the victim must have been unarmed, and in most cases not in the commission of a crime. But what if the victim is armed with a knife, stick, screwdriver, or any other non-firearm weapon? And the victim is a woman, and suffers from mental or emotional challenges?

The LAPD and other police departments have long grappled with these thorny questions. There is no one size fits all answer. Police departments have an array of non-lethal weapons that include bean bags, tasers, stun guns, rubber and wooden bullets, pepper spray, and of course, shouts, commands, and attempts to talk down a suspect. But, in the event of any sudden movement toward an officer, all bets are off. The outcome is almost always predictable, namely the use of deadly force. Yet, there are many cases where officers have subdued a suspect who has directly confronted an officer with a knife or other potentially lethal weapon without firing a shot and without incurring injury to themselves or the suspect.

While the use of force levels will even in the best-case situations remain a judgment call, there still must be clear policy guidelines that spell out the situations in which non-lethal force can and must be used. There are court rulings that give solid guidance on this.

A sweeping National Institute of Justice study in 2011 on the use of non-lethal force found that injuries to officers and suspects markedly decreased with the use of non-lethal devices from tasers to pepper spray. It also recommended that good policies and training requirements that officers evaluate the age, size, sex, apparent physical capabilities, and health concerns of a suspect in determining what level and type of force to be used.

The answer to the question of whether the use of deadly force in many of these slayings is necessary should be beyond any doubt. It is a resounding no. This makes it even more compelling for LAPD Chief Moore to take an even harder look at when, on whom, and in what circumstances non-lethal force should be used. This is not just a matter of life and death. It is a matter of good public and police policy. It is also a matter Moore must address before he is reappointed.