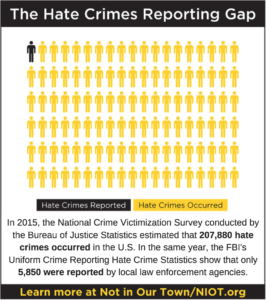 The pattern in the Club Q mass carnage is disturbingly the same. You have a young white alleged shooter. In this case a guy who goes by the name Anderson Lee Aldrich. You have multiple deaths and injuries from the shooting. You have a clear history of violence by the alleged shooter. You have social media postings from him that strongly indicate warped, unabashed hate rants.

You have the victims in a well-known club that caters to LGBT clientele. Most grotesquely you a shooter who obviously targets patrons of the club because they are gay. The motive is palpable. The hatred is even more palpable. A survey earlier this year by the Hate Free Colorado found that nearly a third of adults said they experienced bias, or a hate crime based on their sexual orientation.

Yet officials following the Club Q slaughter gave only tentative indication that Aldrich will be prosecuted both on multiple murder charges and state hate crime charges.

The immediate reason prosecutors give for slow-walking hate crime prosecutions in cases such as the Club Q slayings is that it is tough to fathom, let alone, prove that the alleged assailant killed solely because he hated the victims because of their race, gender, or in the case of Club Q, because of their sexual preference. The Colorado legislature loosened the law in 2021 to make bias motivation only one factor in determining what is a hate crime.

The great danger in not quickly slapping hate crime charges in these cases is that it minimizes and marginalizes hate violence. Hate crimes, and especially hate crime violence, remain grossly under-reported and prosecuted.

The Department of Justice’s Bureau of Justice Statistics tracked hate crime reporting and violence from 2003 to 2011. Its findings were appalling. It found that a huge portion of hate crimes are never reported to law enforcement. It found that a considerable number of the hate crimes that are both reported and un-reported have resulted in serious injury or death to the victims. In fact, the study found that victims of hate violence are more likely to be injured than victims of ordinary crimes of violence.

There is little evidence that this has changed in 2022. This was more than evident in the Hate Free Colorado survey on hate crimes against LGBT individuals.

The even greater problem is that often when hate crimes are reported as such the perpetrators often evade full punishment. This has nothing to do with the First Amendment, but muddled, confused, and outright lax enforcement and prosecution of hate acts. Even when the FBI and local law enforcement agencies ID individuals for their propensity for violence their hands are still tied.

State prosecutors flatly say that the hate perpetrators are more likely to be convicted and get stiff sentences if their crime is treated as just a garden variety criminal case. This makes good legal and political sense — if they’re prosecuted locally and if there’s a hate crime enhancement which is far from assured.

Yet, that’s not the only reason for their hands off on many hate criminals. Except in the highest profile cases, they see these prosecutions as no-win cases with little political gain, and the risk of making enemies of local police and town officials. Hate crimes may be horrific but they are seen as common crimes and are treated as such. Few state prosecutors will chance inflaming racial, gender or sexual orientation passions and hatreds by slapping a hate crime tag on a case except in the most heinous and high-profile cases.

There’s also the belief that hate crimes are mostly a thing of the past. When they do occur, they are isolated acts committed by a handful of quacks, and unhinged young person’s such as Aldrich, and that state authorities vigorously report and prosecute the perpetrators of these crimes. This is a myth.

When Congress passed the Hate Crimes Statistics Act of 1990, it compelled the FBI to collect figures on hate violence. But it did not compel police agencies to report them. Record keeping on hate crimes is still left up to the discretion of local police chiefs and city officials.

Many police departments still refuse to report hate crimes, or to label crimes in which gays, Jews and minorities are targeted because of race, religion, or sexual orientation as hate crimes. Still other police departments don’t bother compiling them because they regard hate crimes as a politically loaded minefield that can tarnish their image and create even more political friction. The official indifference by many police agencies to hate crimes prevents federal officials, even if they wanted to enforce civil rights laws more aggressively, from accurately gauging the magnitude of civil rights violence.
The mass slayings at Club Q scream for a prosecution as a gay hating motivated hate crime. Anything less sends the wrong message about hate.

Earl Ofari Hutchinson is an author and political analyst. His latest book is West, Irving and the Never -Ending Debate over Black Anti-Semitism (Amazon Kindle) He is the host of the weekly Hutchinson Report on KPFK 90.7 FM Los Angeles and the Pacifica Network. He is the publisher of thehutchinsonreport.net