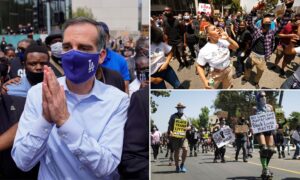 There was one moment that will always stand out for me that tells much about soon former Mayor Eric Garcetti’s eight-year tenure at City Hall. That was a long zoom one on one meeting I had with him in 2021 about the annual city budget. He was trying hard to reconcile his desire to pump millions more into a range of much needed city services while at the same time not drastically cutting the LAPD’s budget. A budget which legions of BLM and other LAPD critics raged at as being outrageously bloated.

It was a tough call. Garcetti reached out to me and other community leaders to get their views and ultimately support in his effort.

Garcetti’s juggling act on the budget typified many of the problems even agonies he faced during his tenure. Always the critics were there, and always he walked a fine line. Garcetti’s inherent low keyed, non-confrontational, media averse style seemingly was suited to deal with the mounting pressure of LAPD reform, traffic glut, wildly unchecked high-end development, and the runaway number one problem, homelessness. This did much to keep him out of political and personal harms way for most of his eight years at City Hall. But only most. He was still closely watched by many to see how he would respond to the city’s crisis issues, and just how effective those responses would be. It was a mixed bag

Start with the problem that is the greatest eyesore, and has defied every plan, solution, program, or action to eliminate. Again, that’s homelessness. On any given day or night, many of L.A.s streets, parks, and freeway overpasses look like Kolkata (Calcutta) at its worst.

Garcetti did much to call attention to the mounting crisis. He championed all the measures put forth to deal with the crisis. They included:  bond measures, ramped up spending, hotel, and resident vouchers, and sheltering, ordinances banning the homeless from this or that place, and police crackdowns.

None of these measures and Garcetti’s putting his political muscle behind them dented the problem. The battered makeshift tents and encampments that dot L.A. continued to balloon. Fairly and unfairly, he got much blame for this. The knock continued to be that Garcetti was not taking an aggressive, in the public eye leadership stance on the issue. The even bigger knock against him was that he fiddled while big corporate high-end developers ran roughshod over City Hall and continued to plaster the city with grossly unaffordable units that dumped thousands more on the streets.

Garcetti must take some of the blame for that. He certainly recognized that in tandem with the city’s virtually unchecked spawl it had turned the freeways and streets into stalled parking lots for hours on end. The answer was the continued expansion of light transit, busways, traffic signal coordination and synchronization, traffic flow monitors at major thoroughfares, and carpooling incentives. Garcetti pushed for much of that, but not enough.

Then there was the always thorny issue of police misconduct. The issue exploded in L.A. following the murder in Minneapolis of George Floyd. There were massive, often violent, demonstrations and near riots in the city. Garcetti was held virtual hostage in his own residence by BLM protesters demanding he back BLM’s demand to defund the LAPD.

Garcetti walked the tightrope again on this one. He publicly had soothing words for BLM about police abuse and even hinted that he would explore cuts in the LAPD’s budget. However, when the dust cleared the LAPD as usual got every penny it asked for and then some. Whether that could be chalked up as a success or failure for Garcetti was subject to interpretation. However, it was clear Garcetti would not be remembered by police reform advocates as their champion.

Then there was the L.A. City Council. It did not take a leaked tape of three city councilpersons making dismissive, derogatory, and alleged racist statements for many to regard the city council as corrupt, dysfunctional, and totally self-serving. Whether Garcetti understood how deep the dysfunctionality went was not evident at least from his public pronouncements.

He did not get that there were countless number of L.A. voters who were fed up with the malaise, the fog of government, and the self-serving it is about all about me careerism that enveloped the city council and the mayor’s office in times past. Garcetti’s task was to make a good faith effort to clamp down on special interest deal-making cronyism, in and outside City Hall, trim a bloated city bureaucracy, and sneaky and upfront tax increases that smacked of old-fashioned political pork-barreling.

Put bluntly, that meant snatching the “for sale” sign off City Hall. Garcetti never effectively managed to do that.

Garcetti did frequently trot to Washington to lobby for more funding for housing, and business development in grossly underserved South and East L.A. That was a good sign that he understood the gaping disparity between chronically impoverished mostly Black and Hispanic areas of L.A. and the mostly white, mid to upper class Westside. But the brutal fact is that despite his best efforts to jumpstart more aid programs in South L.A. the poverty at the end of his term in that area was no different than at the beginning. He cannot be totally faulted for that. Yet, the dire economic conditions in impoverished parts of L.A. were on his watch.

The verdict. Garcetti did the best he could under trying circumstances. Unfortunately, more often than not it was not enough. That is how he will be remembered.