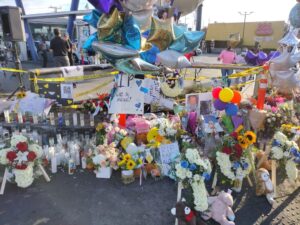 “To ensure that underserved municipalities, neighborhoods, and people, including low-income people and communities of color, are served equitably by the complete streets program.” This was a major aim of the Complete Safe Streets Act introduced in the House on February 24, 2021, by Tennessee Democrat Steve Cohen. It was a big, broad sweeping measure that recognized one fact about America’s streets and highways, especially those in Black, Latino, and Native American communities. They were dangerous. And there was not a lot being done to make them safer.

More than a year after Cohen introduced his bill, I made this demand. The demand was that the L.A. County Board of Supervisors, the CHP. The L.A. County Sheriffs, and the L.A. County Department of Public Works do whatever it took to curtail the colossal pedestrian and vehicle hazards at the intersection of Slauson and La Brea. In Los Angeles. I, and others, knew and feared that this corner and many others throughout the city posed a severe hazard precisely because of the unsafe conditions that prevailed on many unkept, unmaintained, and traffic hazard urban streets that Cohen’s bill in large part aimed to address. The August 4 crash was an accident, maybe one with terrible consequences for a city and a nation, waiting to happen. It did.

As we know, a thirty-seven-year-old registered nurse Nicole Linton crashed her vehicle into that intersection. The crash killed six persons, including, most heartbreaking a pregnant mother and her one-year-old child, and injured eight others.

However, what is less known is that seven months before Linton’s horrendous carnage crash, Peter Buttigieg, Secretary of Transportation, likewise, was plainly worried about the mounting danger of driving fatalities. What spurred Buttigieg was the near record sharp increase in car fatalities in 2020. Preliminary figures on traffic fatalities mid-year 2021, showed there was no indication that there would be a no slowdown in the mounting toll by the close of 2021, “It doesn’t look good, and I continue to be extremely concerned about the trend.” Buttigieg unlike many other transportation experts and commentators did not simply chalk the mounting vehicle death toll up to momentary aberrant behavior caused by the pandemic.

He saw a more ominous picture emerging, “Somehow it has become over the years and decades as normal, sort of the cost of doing business. Even through a pandemic that led to considerably less driving, we continue to see more danger on our roads.” He promised that his office and other highway transportation agencies would take action to curb the death toll. Buttigieg’s concern about the mounting death toll from traffic accidents promise and the Linton crash made it even more imperative to take action.

What he didn’t say was that as was the case with Linton, Blacks were by far the most at risk from vehicle fatalities. A study by the National Highway Traffic Safety Administration in June 2021 found that Black vehicle fatalities leaped a staggering 23 percent jump during the surge in 2020 from the year before. The grim numbers told the deadly tale, 38,680 people were killed in traffic crashes in 2020. 7,494 of them were Black. That was by far the highest percentage increase out of any race. The increase for white motorists was four percent over 2019.

Driving or walking for Blacks and many others was once again a recognized public policy hazard to health. There were clear reasons why.

The Safe Transportation Research and Education Center, a Berkeley, California-based, transportation safety advocacy group, made this graphic statement regarding the heightened peril that driving posed to Blacks, Latinos, and Native Americans.

“Over the past half-century in the United States, medical advances, improvements in road and vehicle design, and traffic safety efforts have all helped in reducing traffic-related injury and death. However, research suggests that among the US population, certain ethnic groups, namely African Americans, American Indians, and Latinos, continue to face higher traffic-related risk. Among all US ethnic groups, motor-vehicle injury is a leading contributor to unnecessary injury and premature death. Improving traffic safety outcomes among these groups could help reduce their overall health disparities.”

The center’s worry and warning about the driving peril could not have been plainer. It entitled its report, “Traffic safety in Communities of Color.” The report was a wake-up call about the gross laxity or non-existence of viable traffic safety measures in those communities and hopefully a prod to state and local transportation officials to take affirmative action to reduce the greater hazard that vehicle deaths posed to these communities.

The problem was that the report was issued in 2003. It would be almost two decades before a comparable report was issued by a transportation safety advocacy group on the high hazard of traffic fatalities to Blacks and other minorities. That study was by the Governors Highway Safety Association in June 2021. In its report, the GHSA zeroed in on the inequality in traffic safety and called on states and communities to prioritize infrastructure investments in underserved communities and ensure diverse representation in transportation leadership.

The Slauson and LaBrea crash and many others that claim so many lives reaffirms the truth that many of America’s streets and highways in Black and minority neighborhoods are health menaces. Now, as with any other health crisis, the question is what will be done about it?

Earl Ofari Hutchinson is an author and political analyst. He is the author of the forthcoming; Warning: Driving May be Hazardous to Black Health (Middle Passage Press)